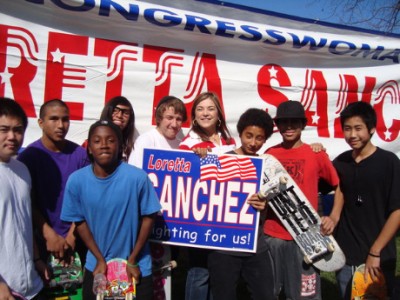 “As a Pell Grant recipient myself, I know that every dollar counts when you’re trying to put yourself through college,” said Rep. Sanchez. “In our changing economy, today’s student is not necessarily full-time, living on campus, or between the ages of 18 and 22. The Middle Class CHANCE Act will increase access to higher education for all our students by restoring the strength and length of the Pell Grant.”

When the Pell Grant was created in 1972 it covered the full cost of college. However, next year’s maximum Pell award will cover the smallest share of college costs since the start of the program: just one-third of the cost of a public four-year college. And while college tuition across the country has grown as much as fifty percent from 2004 to 2014, state funding for public post-secondary institutions has steadily decreased. California’s spending per student at state schools remains near the lowest point in more than thirty years. These factors have shifted the burden of higher tuition and cost of living to students, saddling them with increased debt.

Pell Grants make post-secondary options possible for millions of Americans, yet over the last five years Congress has continued to cut the programs funding. Rep. Sanchez’s bill would address the significant loss in Pell Grants and combat increasing costs of college and student debt by:

1) Increasing the individual maximum award by $4,040 to $8,900;
2) Restoring year-round Pell grants, allowing students to receive funding for courses taken during the summer or intersession; and
3) Allowing Pell grant recipients to use the awards for 15 semesters instead of the current 12.

« Santa Ana is the third lowest wrinkle-prone region in the U.S.
The SAPD cracks down on an illegal fireworks Craigslist vendor »