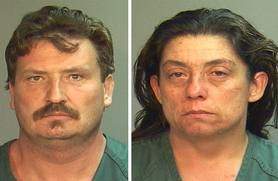 Co-defendant Michael William Ross, 30, Long Beach, pleaded guilty Sept. 27, 2013, to one felony count each of second degree murder, robbery, and attempted robbery. He was sentenced to 15 years to life in state prison.

Circumstances of the Orange County Murder

Carroll and Hamel drove and followed Bui, who drove Nguyen to her Santa Ana home. Carroll and Hamel blocked-in Bui’s car after he stopped alongside the curb in front of Nguyen’s home. Carroll got out of the vehicle, approached the victims, and pointed a knife at them to steal their winnings. He knocked Bui to the ground and got back into the Grand Prix. Hamel drove over Bui’s head, killing him instantly, and then fled the scene with Carroll. Nguyen called 911.

SAPD and LASD coordinated the investigation of this case with assistance from the Hawaiian Gardens Casino.