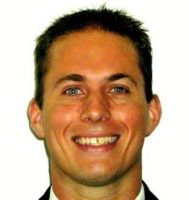 The World Games is an athletic event open to all active and retired law enforcement and fire service personnel throughout the world. This year’s event was held in Los Angeles from Aug. 7, 2017, to Aug. 16, 2017. The concept originated from the California Police Olympics that took place in 1967. From there, it grew into a global event that occurs biennially in a new location. This program is meant to help peace officers and fire fighters promote the concept of physical fitness and sport in their communities.

Tucker trains for the events at CSULB and with the Riptide Masters Swim team. Tucker has also competed in the annual Baker to Vegas race for the past 23 years.

“At the OCDA, we have several exceptional athletes that highlight the importance of staying active and healthy,” said District Attorney Tony Rackauckas. “Mr. Tucker leads by that example and I applaud him for winning eight medals with such challenging competition. I also congratulate all those in law enforcement from around the world that competed alongside him.”

“I am proud to represent the District Attorney’s Office in my 20th year of competition at the World Police & Fire Games,” said Tucker.

The next World Police and Fire Games will be held in Chengdu, China in 2019.