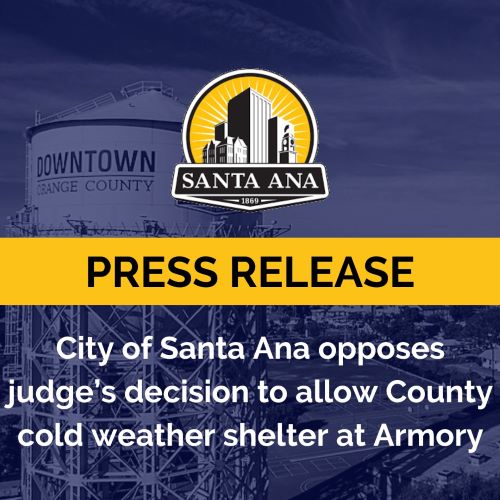 SANTA ANA, Calif. – The City of Santa Ana is disheartened and disappointed to learn that on Friday, Oct. 21, U.S. District Judge David O. Carter gave the green light to the County of Orange to open a cold weather shelter at the National Guard Armory located at 612 E. Warner Ave.

The City argued, and Judge Carter agreed during both court proceedings, that homelessness is a regional and countywide issue that every city in Orange County should help address, particularly in South County, which has a severe lack of shelter beds. The City also believes that an emergency does not exist to warrant opening the cold weather shelter in Santa Ana, since the County already operates a year-round shelter with 425 beds here and the City operates a year-round shelter with 200 beds.

The City of Santa Ana calls on the County of Orange to once and for all address the homelessness crisis at a countywide level. The County should do what’s best for people experiencing homelessness in every city by providing local shelters, instead of forcing unhoused individuals to come to Santa Ana.