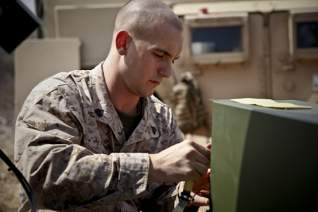 At approximately 10:30 p.m. on Feb. 13, 2012, Hale arrived at Hennessey’s Tavern in Dana Point with three friends. The defendant and his friends were all Marines stationed at Marine Corp Base Camp Pendleton. The friends included Christopher Arzola, 21, of Mass., Jeremiah Callahan, 23, of Neb., and Jason Chleborad, 22, of S.D.

At approximately 1:50 a.m. on Feb. 14, 2012, the defendant drove away from the bar in his Dodge sedan with his three friends as passengers.

At approximately 2:00 a.m. Hale drove northbound on Golden Lantern in Dana Point. As he approached a curve in the road at the intersection at Terra Vista, the defendant lost control of his vehicle, ran over the landscaped center median, and crashed into a tree on the passenger’s side of the car. The car spun around the tree and came to rest against the tree on the median.

Hale was knocked unconscious in the crash and transported to Mission Hospital, where he was treated for brain trauma and a fractured arm. Approximately an hour and a half after the crash, Hale had a blood alcohol level of .16 percent.

During Hale’s sentencing today, several of the victims’ family members submitted written impact statements which were read before the court. Callahan’s father said in part, “This will be the third time that I will describe the thoughts, pain and loss of my best friend and son JC. The first time was in a state of shock with the support of many family members as we prepared JC’s obituary. This was not an English assignment. Do you know how hard it is to write the obituary of your child? The anguish that you feel does not compare to the lifelong emptiness that you will begin to experience very soon in your life.

Chleborad’s father said in part, “We all know what two Marines and a Chaplain represent at your front door. It was the worst moment in my life and forever will be. The second worst moment was facing my family and the two Marines and having to stand tall and be strong for them.” He went on to say that, “this situation has drug on for almost three years. That in itself has been all-consuming for our family. You had the opportunity to stand up and be a man, apologize and take responsibility for your actions. You chose not to.”

Chleborad’s mother said in part, “What I know is that that it will never change for me or my family. There will always be a place at the table that is vacant for every family meal, every milestone and every holiday. Our loss as well as that of the other two families is the same.” She went on to say that, “no matter what happens in this court, it will not change my reality. My son is at Black Hills National Cemetery.”