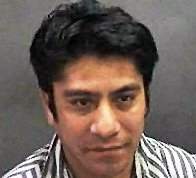 SANTA ANA – A man was sentenced today to 45 years to life in state prison for forcibly raping two women after luring them under the pretense of performing a spiritual cleansing. Alberto Flores Ramirez, 39, San Clemente, was found guilty by a jury April 22, 2014, of two felony counts each of forcible rape, forcible oral copulation, one felony count each of sexual penetration by foreign object by force, attempted forcible oral copulation, and a sentencing enhancement for sex crimes against multiple victims.

Ramirez met 33-year-old Jane Doe #1 through an online dating website. On April 3, 2012, he met Jane Doe #1 at a McDonald’s in Santa Ana. Ramirez told Jane Doe #1 that he could help bring her children to California from Mexico by performing a spiritual cleansing on her to get rid of her negative vibes. Jane Doe #1 agreed to participate.

The defendant drove Jane Doe #1 from the McDonald’s to a motel in Santa Ana. Once inside a motel room, he instructed Jane Doe #1 to undress in order for him to perform the cleansing. Jane Doe #1 removed her clothing but left on her bra and underwear. Ramirez rubbed raw eggs on the victim’s body and fondled Jane Doe #1.

The defendant then forcibly orally copulated the victim. When the victim attempted to cover herself with the comforter from the bed, Ramirez jumped on top of the victim and restrained her. He strangled Jane Doe #1 and threatened her that she had to stop fighting and then digitally penetrated her and forcibly raped the victim.

After the sexual assault, Ramirez drove Jane Doe #1 back to her car. The victim drove away from the parking lot and called 911 from her car. The Santa Ana Police Department (SAPD) responded and investigated this case.

On April 10, 2012, Ramirez drove to a Santa Ana parking lot with the intention of meeting Jane Doe #1 again and was arrested by SAPD at that time. Based on the media coverage of this case, law enforcement learned of a second victim.

Ramirez met 49-year-old Jane Doe #2 on Facebook and began communicating with her online and via text message. He offered to perform a spiritual cleansing for Jane Doe #2 to help her with her love life. On Feb. 17, 2012, Jane Doe #2 and a friend traveled by bus from Las Vegas to Orange County to meet in person with Ramirez. The defendant instructed the victim to buy specific items for the spiritual cleansing including ammonia and eggs.

Ramirez mixed lotion and ammonia and rubbed it on Jane Doe #2’s body and head while she lay on the bed, causing her to become dizzy and disoriented. He then removed his clothes and unsuccessfully attempted to force Jane Doe #2 to orally copulate him. The defendant forcibly orally copulated the victim and then forcibly raped her as she struggled to get away.

After the rape, Jane Doe #2 was able to leave with her friend, but did not report the sexual assault to law enforcement until seeing media coverage of the rape of Jane Doe #1.

At today’s sentencing, Jane Doe #1 gave an impact statement to the court. She described how she took pity on the defendant for leading a double life after learning about the defendant’s family and children. She went on to say that she hopes the crimes the defendant committed were worth him spending the rest of his life locked up in prison.

« Broadway road construction will limit traffic to one lane in each direction
OC Young Democrats mixer to feature the head of the Assoc. of OC Deputy Sheriffs »