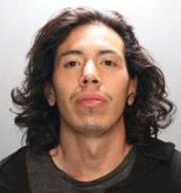 At approximately 7 p.m. last night, the Tustin Police Dispatch Center received a call from a witness stating they just watched a man push an elderly female to the ground then run away just south of Old Town Tustin.

Despite an exhaustive search of the area, Tustin Officers were unable to locate the suspect nor the victim of the crime.

One hour later, Tustin Police received an additional 911 call about a male attacking a female near the closed Taco Bell on Newport Avenue. The suspect’s description of the second call matched the description from the first call.

As officers were investigating the second incident, another 911 caller advised a male suspect had attempted to get into her vehicle as she left her apartment complex near Walnut Avenue. At this time, all available on-duty Tustin Police resources, as well as a helicopter from an assisting agency were extensively searching for the suspect.

At approximately 8:15 pm, a Foothill Hospital security guard called 911 and advised he had just fought off a male who attempted to steal his radio.

A few moments later, one final 911 call was received in which an eight-months pregnant female stated she had been punched in the stomach by the male and he had ran towards the dead end of Newport Avenue.

Shortly after, a Tustin Police Officer located the male and detained him with the assistance of responding officers near the intersection of Kenyon Drive and Newport Avenue. The suspect was arrested without further incident and booked at OCJ for various charges.

Thank you to our community members for calling 911 and giving critical updates to our dispatchers and officers who worked in unison to bring this volatile situation to a much-needed resolution. The suspect was identified as 28-year old Sean Anthony Aguilera of Orange.

If anyone witnessed this suspect’s behavior or a crime, or believes they were a victim of a crime from the suspect, please contact Detective Haug at ehaug@tustinca.org or (714) 573-3246.