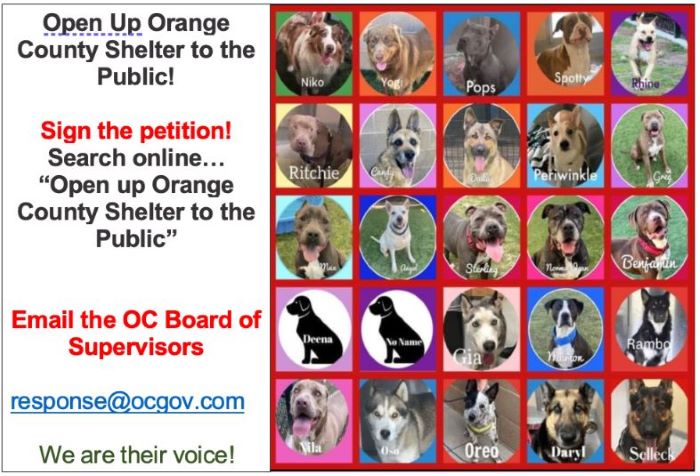 Local activists are demanding that the OC Animal Care Shelter in Tustin reopen and that animals are being euthanized because of the shelter’s current policies.

Pet adoptions are currently by appointment only, for a specific animal that must first be selected from the OCAC website. Interactions between members of the public and animals are currently allowed only IF a potential adopter secures a supervised appointment.

OC Animal Care says on their PR and on their website that walk-ins are welcome however that actually means that people are welcome to walk-in to make an appointment on a computer in the lobby, and to select a specific animal they want to see. They are not allowed to freely roam the campus as they had before 2020. The activists contend that potential adopters should be allowed to walk around freely and take the time they need to find and connect with the right pet for them.

OC Animal Care is proud to report the save rate for 2021 was 94.81% for dogs – That does not mean the number of dogs adopted. The percentage of dogs actually adopted (some to the public some to rescue groups) was 37.8%. They also transferred 16.8% to other shelters and agencies.

The activists also point out that Orange County is one of the wealthiest counties in California, yet there is no county spay and neutering service being provided for the community. Most other counties and cities have such programs because they understand the importance of spay and neutering. Why doesn’t Orange County offer that service? OC Animal Care services 14 cities within the county, which amounts to almost 2 million residents. Why is there no service being offered to spay and neuter for free or truly at a low cost?

There are a few things you can do now to make a difference for the animals at the OC Shelter: