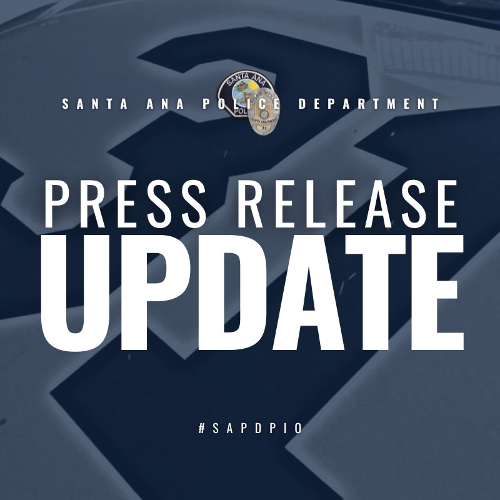 On Thursday, August 11, 2022, at 2:48 PM, Santa Ana Police Communications received a request for assistance from the Orange County Fire Authority (OCFA). OCFA advised they were out with a possible assault victim along the bike trail in the 2600 block of N. Broadway Avenue. Paramedics treated the male adult victim for a stab wound to the head. The male was subsequently transported to a local hospital in critical condition.

On August 16, 2022, at 7:19 PM, the victim was pronounced deceased. The victim was identified as 28-year-old Aaron William Parks. Detectives learned the victim was homeless and that the stabbing possibly stemmed from a dispute. Homicide Detectives are actively working on the case and ask that anyone with information contact the Santa Ana Police Department, Homicide Section Detectives at (714) 245-8390 or Orange County Crime Stoppers at 1-855-TIP-OCCS.

The motive for the murder appears to be a result of an unprovoked attack. Anyone with information on the case is asked to call SAPD Homicide Section Detectives at (714) 245-8390, or Orange County Crime Stoppers at 1-855-TIP-OCCS.