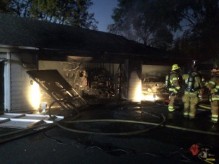 A townhome complex located at 3600 Bear St., in Santa Ana caught fire on Saturday afternoon at around 4:50 p.m., according to the O.C. Fire Authority’s Twitter page.

Thirty firefighters responded to the fire, from the OCFA and the Costa Mesa and Fountain Valley Fire Departments. The fire was brought under control in 35 minutes. The fire destroyed two garages and three vehicles, but no one was injured.

The fire caused $250k to struct & $150k to the contents. The cause is still under investigation.