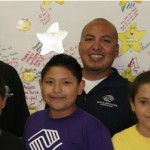 « Rep. Sanchez urges the Republicans to avoid a government shutdown
B-25 Fly Day at the Lyon Air Museum on April 9 »