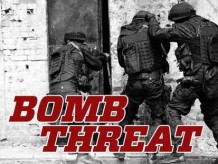 A bomb scare has resulted in the closure of all lanes on North Grand Avenue between Santa Ana Boulevard and Seventeenth Street while Orange County Sheriff’s Department officials check out the threat, according to the O.C. Register.

As if Santa Ana was not on edge already with three escaped violent convicts on the loose!

The item that is at the heart of this latest disturbance is an abandoned black suitcase with wires sticking out of it.

The SAPD received a call about the item at 8:07 a.m. today when someone saw the item on the west sidewalk of the 1300 block of North Grand Avenue, just south of the Target on 17th St.

“Officers examined what turned out to be a large, black suitcase with wires protruding from the suitcase,” Smith said.

The police have not evacuated anyone out of the nearby buildings.

There is no word yet as to when the street will reopen. Drivers should avoid the area.

« A bicyclist was struck by a car and killed in Santa Ana last night
North Grand Ave. reopened after bomb scare turns out to be a false alarm »