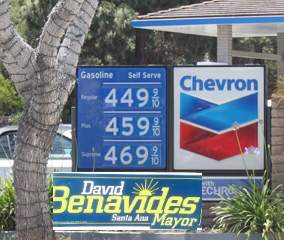 That could be bad news for Santa Ana Mayoral challenger David Benavides and his left-wing Council majority.  Benavides and his allies – Council Member Vince Sarmiento and Council candidates Eric Alderete and Roman Reyna, have all said, at a public candidates’ forum that they support every single tax increase measure on the Nov. 6 general election ballot, including Prop. 30, which “increases the sales tax, which is applied to gasoline sales,” according to Fox & Hounds.  END_OF_DOCUMENT_TOKEN_TO_BE_REPLACED