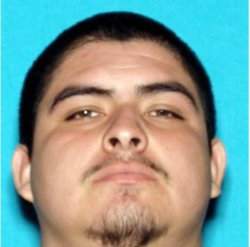 Synopsis: In early 2014, Guerra and three additional gang members from the City of Ontario were involved in a series of commercial robberies throughout the cities of Santa Ana, Anaheim and Garden Grove. Three of the four suspects are currently in custody and Guerra remains outstanding. Guerra is known to frequent the cities of Pomona, Ontario and Chino. END_OF_DOCUMENT_TOKEN_TO_BE_REPLACED