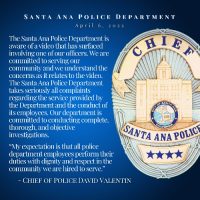 SAPD police officers were trying to investigate the theft of a stolen automobile but a resident who is apparently a YouTuber was interfering with the investigation by videotaping the officers. The officers responded by playing loud music from the Disney movie Encanto and that is when Santa Ana City Councilman Johnathan Ryan Hernandez got involved.

Hernandez did not reprimand the resident who was interfering with the investigation. Instead he zeroed in on the police officers asking them if they knew who he is. He then asked them a question gang members often pose “where you from” proceeding to reprimand the police officer for not living in Santa Ana and for playing the loud music.

It was about 10 pm at the time and the loud music was disturbing the residents. Hernandez was right to point this out. However he clearly had no issue with the YouTuber interfering with a legitimate stolen vehicle investigation.

Just a few months ago Hernandez’ own cousin, Brandon Lopez, was shot and killed after leading police from two cities on a police pursuit in a stolen vehicle that ran through four cities before ending in Santa Ana.

Perhaps Hernandez does not look at auto theft as a crime worth punishing? Is this any surprise given that he was groomed for office by his mentor, Roman Reyna, who was convicted of a felony in 2019 and ordered to pay $578,053 in an embarrassing election fraud case? Reyna to date has barely paid any of that back. Booted off the City Council Reyna now is trying to pay his bills by renting party equipment. Hernandez criticized the SAPD police officers over misuse of resources paid for by taxpayer dollars but what about the half a million dollars his mentor Reyna still owes to the taxpayers?

Hernandez and his City Council cohorts Jesse Lopez and Mayor Vince Sarmiento have painted a big target not on our criminals but rather on our police. Hernandez even spoke up at a recent Santa Ana City Council meeting against spending more money to cover up graffiti!

SAPD police officers should not wake up neighborhoods with loud music but they also should be allowed to go about their police business without getting interfered with by residents who believe the police, not the criminals, are the problem. That is the mindset created by politicians like Hernandez.