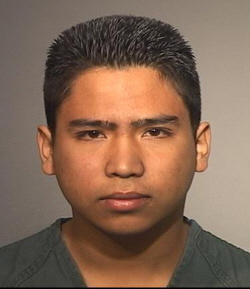 On 07/22/11, 2235 hours, officers were dispatched to 327 E. Washington Ave., regarding a subject shot. Officers located 16-year-old Alberto David Miller, who had been wounded by gunfire. Miller was transported to Western-Medical Center Santa Ana, by paramedics and was pronounced dead on arrival.

During the ongoing investigation, Gang Unit detectives were able to identify two suspects and took one, Juan Galvan age 19, into custody on Sunday, July 24, 2011. The second suspect remains outstanding.

The outstanding suspect is Jesus Canales, age 18, resident of Santa Ana. His current whereabouts are unknown. Photo available to the media.

In May 2007, the Santa Ana Police Department, with the help of an anonymous donor, created a Gang Homicide Reward Program. The donation is used to offer monetary rewards for information leading to the arrest of gang homicide suspects. Providers of information may remain anonymous. To date $252,000 has been paid in rewards. In 2011, $65,000 were paid in rewards to multiple providers of information involving several gang homicide and assault cases.