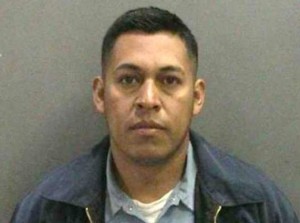 At approximately 8:00 p.m. on Nov. 3, 2001, 19-year-old Jane Doe was waiting at a bus stop on Main Street in Orange. Moreno-Perez drove up in his vehicle and stopped his car near Jane Doe. He asked the victim if she wanted a ride and then drove away when she declined.

Several minutes later, Moreno-Perez returned to the bus stop and got out of his car to sit on the bench next to Jane Doe. He put his arm around the victim and told her that he wanted to take her home. Jane Doe refused and Moreno-Perez then forced the victim to stand up and get into his car.

Moreno-Perez slapped Jane Doe as she tried to resist and drove her to a parking lot behind a grocery store in Garden Grove. When Jane Doe got out of the parked car and attempted to escape, Moreno-Perez chased and pushed her before forcing her back to the car. Once back inside the vehicle, Moreno-Perez forced Jane Doe to orally copulate him.

Jane Doe was finally able to escape and reported the sexual assault to the Orange Police Department (OPD), who investigated the case. Evidence was collected, including DNA, but the case went cold. The Orange County Crime Laboratory created a DNA profile of the unknown offender at that time.

On March 30, 2012, a day after Moreno-Perez’s DNA was entered into the local OCDA’s local DNA database due to an unrelated case, the defendant was linked to the sexual assault of Jane Doe based on a match to evidence collected at the scene in 2001. The OCDA immediately notified OPD about the sexual assault DNA hit. The defendant was located at his girlfriend’s Fontana home and was arrested April 10, 2012, by OPD.