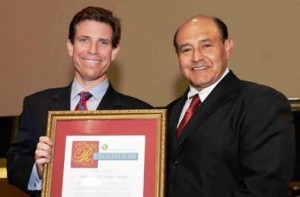 Frank Talarico, Jr. is the president and CEO of Goodwill of Orange County since 2012. Talarico aggressively embraced the Goodwill mission to “help people who are facing barriers to finding employment” as his own. He is creating unique entrepreneurial programs and services that better reach existing and emerging target audiences.

His most recent Goodwill start-up program is designed to market young veteran jobseekers by highlighting the advantages they possess as a result of their having served in the military. Enduring Independence, launched in November 2013, which is a veteran initiative that focuses on employers rather than on veterans. Talarico is confident that Enduring Independence will assist in opening 10,000 doorways into Orange County’s business community for young veterans by 2020.

Goodwill of Orange County’s other innovative and entrepreneurial programs have included the opening of the Goodwill Fitness Center, one of only a few gyms in the country specifically designed for people living with physical disabilities or chronic illness; as well as the first internet auction site owned and operated by a nonprofit organization, shopgoodwill.com. Since Talarico has taken the helm, Goodwill of Orange County has also launched the Goodwill Exchange, an online auction platform for Goodwill organizations to sell their recyclables and commodities to a network of over 80 million buyers worldwide.

Launching unique programs, rebranding and expanding long-standing institutions are not new areas of focus for Talarico. Prior to joining Goodwill, Talarico served as the CEO of JSerra, a private Catholic school in San Juan Capistrano, where he was responsible for the school’s increased enrollment, improved brand image, and significant debt reduction. Preceding this engagement, he was vice president of institutional advancement for Servite High School where he and his team changed the way the 45-year-old organization presented itself and grew the organization through dramatically increased profit.

Today, not only is Talarico a top local business leader spearheading one of America’s first social enterprises, but through his entrepreneurial spirit and innovative start-up programs, he is extending Goodwill of Orange County’s influence and improving opportunities for the 115,000 people the organization is available to serve.

For more details regarding the notable accomplishments of Frank Talarico, Jr., please come to Tuesday’s city council meeting or visit, http://www.santa-ana.org/coc/granicus.asp, to see it streamed live on the web.

« Rep. Sanchez announces the winner of the 2014 Congressional art contest
The SAUSD will provide free lunches through the Summer FEEDING program »