Garden Grove man the first to die of the West Nile Virus in the O.C. this year 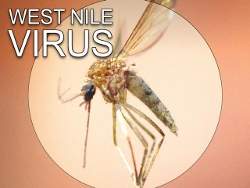 Orange County has had 5 symptomatic WNV infections reported this year. Two had WNV neuroinvasive disease and three had WNV fever; of these, four were hospitalized. Because about 80% of people infected with WNV have no symptoms, and the majority of cases of West Nile fever do not seek medical care and are not tested, the reported case counts greatly underestimate the number of infected people in Orange County.

Symptoms of West Nile fever include fever, headache, body aches and fatigue. Anyone who develops the more serious symptoms of West Nile neuroinvasive disease such as severe headaches, neck stiffness, confusion, muscle weakness or vision loss should seek medical care immediately. People over 50 years of age and those with underlying medical conditions are at increased risk of serious complications from West Nile virus infection.

It is especially important to take precautions against mosquito bites during West Nile virus season. Recommended precautions include:

• Emptying all standing water on your property to reduce areas in which mosquitoes may breed, including flower pots and pet bowls
• Making sure your window and door screens are in good condition
• Using insect repellent containing DEET, picaridin, oil of lemon eucalyptus, or products containing IR3535, always following label directions
• Limiting outdoor activity at dawn and dusk, when mosquitoes are most active
• Wearing long-sleeved shirts and long pants when outdoors

Information on mosquito control is available on the Orange County Mosquito and Vector Control District’s website at www.ocvector.org. Other websites with helpful information about WNV include: