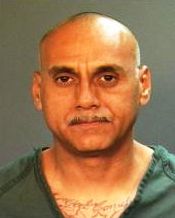 “On or around May or June 2011, Serrano began buying plaintiff gifts including clothes, shoes, and a necklace,” the complaint states.

“Between June 2011 to March 2012, plaintiff was sexually abused, including but not limited to rape, by Serrano in Serrano’s home, at the boxing club, and in hotels across state lines during boxing-related trips.
“On or around January 2012, Serrano began sending plaintiff text messages and Facebook messages, and began physically stalking plaintiff wherever plaintiff went,” Doe says in the complaint.