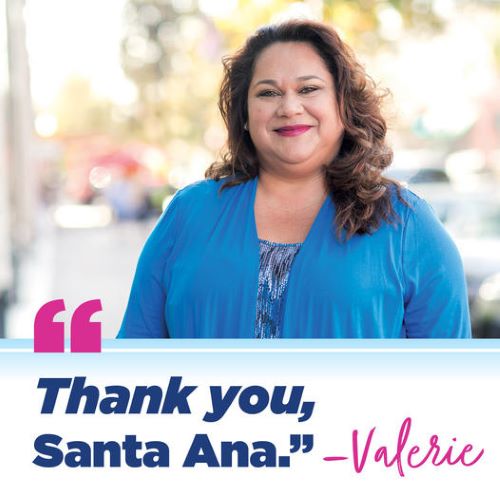 Santa Ana, CA – School Boardmember and longtime community leader Valerie Amezcua has won the election for Santa Ana Mayor. Amezcua will be the first woman to serve as Mayor in the city’s history.

In responding to her electoral victory, Amezcua released the following statement:

“I’m honored by the support I received in this election from friends and neighbors in every corner of Santa Ana. As Santa Ana’s next Mayor, I’ll work to improve the quality of life in our neighborhoods and protect the things that make our city such a special place to live. I’ll also bring a positive and collaborative approach to solving problems at City Hall, and I’ll fight to make city government more responsive, equitable, and transparent. I’m grateful for this opportunity, and I am excited to continue serving my hometown in this new role.”

Valerie Amezcua comes from a family with a long history of community service, which started with her grandmother, Margarita Solorzano, who was involved in Santa Ana politics for many years. Valerie’s father, Alfredo, is a former Community College Board Trustee and a longtime civic leader.

Valerie has served as a member of the Santa Ana Unified School District Board since 2014. She has served as the board’s President or Vice President for five of the past eight years. Professionally, Valerie had a 30-year career with the Orange County Probation Department. As a supervising probation officer, she worked locally in the areas of gang suppression and intervention, sex crimes, and domestic violence. She retired in 2017.

Valerie’s long record of community involvement includes having served on the Board of Directors for the National Hispanic Business Women’s Association (NHBWA), and on both the City of Santa Ana’s Human Relations Commission and Early Prevention & Intervention Commission. She was recognized in 2017 by the Orange County Register as one of the Top 100 Most Influential People in the county, and she was named the 2022 Woman of the Year by the NHBWA.

Valerie is a native of Santa Ana and a graduate of the University of La Verne. She is the proud mother of Mike Melendrez, and she is married to Sam Marin.