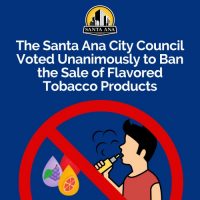 The Santa Ana City Council on Tuesday, March 15, voted unanimously to ban the sale of flavored tobacco products in Santa Ana. The new ordinance will go into effect in 30 days.

The Santa Ana City Council apparently did not pay heed to what happened in San Francisco back in 2018 when the voters approved a ballot measure banning the sale of flavored tobacco products — including menthol cigarettes and flavored vape liquids. It backfired.

According to a study from the Yale School of Public Health (YSPH), analyses found that, after the ban’s implementation, high school students’ odds of smoking conventional cigarettes doubled in San Francisco’s school district as compared to trends in districts without the ban, even when adjusting for individual demographics and other tobacco policies.

Smoking among teenagers has been falling since the late 1990s, and that downward trend accelerated as vaping took off. The replacement of smoking by vaping is indisputably an improvement in terms of “public health,” which the CDC claims to be promoting. But the agency instead portrays it as a grave danger to the youth of America, according to Reason Magazine.

Another study of smokers, in 2021, found that smokers who initially had no intention to quit but became daily vapers were eight times as likely as non-vapers to quit smoking and nearly 10 times as likely to stop smoking every day. This is striking evidence that nicotine vaping products help people give up cigarettes, reinforcing the viability of this harm reduction tool.

So did the Santa Ana City Council bother to study this issue adequately or were they just in a rush to look good before the upcoming elections?

Ultimately smokers who prefer to vape will go find the flavored products they want – they just won’t spend that money in Santa Ana.