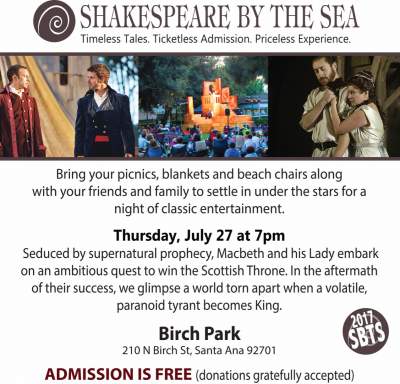 SANTA ANA, CA – Free live performance of one of Shakespeare’s final great tragedy, Macbeth, will be performed at Birch Park, Santa Ana’s Downtown Park, on the corner of Third and Birch Streets Thursday, July 27, 2017 at 7 PM. The Shakespeare by the Sea Theater Company is providing the performance. This is the famous story of Macbeth’s ambition to be King of Scotland, after being tempted by the prophecies of three mysterious witches. This leads Macbeth into a nightmarish world of evil, deceit, and murder. Monstrous actions run rampant as he and Lady Macbeth lose themselves to unstoppable drives of savagery and political atrocity. END_OF_DOCUMENT_TOKEN_TO_BE_REPLACED