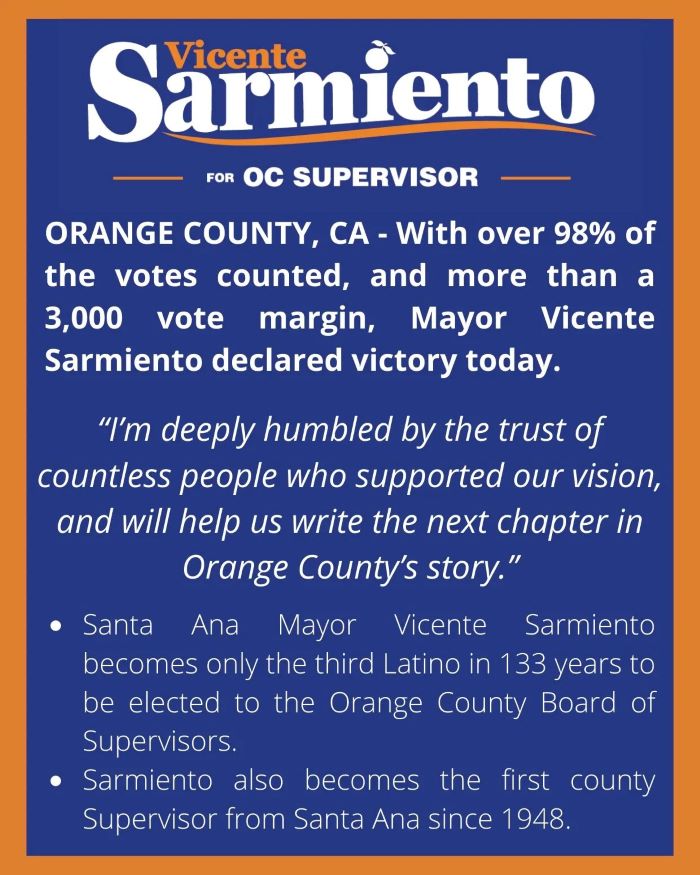 ORANGE COUNTY, CA – With over 98% of the votes counted, and only a 3,000 vote margin, Mayor Vicente Sarmiento declared victory today. After 15 years, Sarmiento finally brings Latino representation to the current Board of Supervisors’ newly drawn Second District that is almost 67% Latino. The district includes Anaheim, Tustin, Orange, Garden Grove, and all of Santa Ana.

Sarmiento inspired broad support with his community-focused message of reducing homelessness, creating safer neighborhoods, and helping working families. “We ran an honest and positive campaign that was responsive to the residents of Orange County, not the special interests,” said Sarmiento. “I’m deeply humbled by the trust of countless people who supported our vision, and will help us write the next chapter in Orange County’s story.”

Mayor Sarmiento’s historic campaign overcame more than half a million dollars in negative ads filled with distorted facts funded by special interests planning to once again dictate the composition of the Board. Fortunately, the people in Orange County’s Second District chose hope over fear, facts instead of lies, and principles over money.

As Mayor, Vicente Sarmiento oversaw the adoption of landmark public policy including a Police Oversight Commission, Rent Stabilization, an aggressive Affordable Housing Ordinance, an Immigrant Legal Defense Fund, and Premium Pay for Essential Workers. He accomplished all of this while creating a $40 million surplus, increasing the city’s fiscal reserves, ensuring a Double A credit rating, and making Santa Ana recognized as one of the best managed cities in California.

Mayor Sarmiento and his family have lived in and around Santa Ana, and central Orange County since 1965. He attended John Muir Elementary, Sierra Elementary, and Willard Intermediate Schools. Mayor Sarmiento now lives in a 1929 historic home in the Saddleback View neighborhood, three blocks from where he grew up. Presently, he and his wife Eva, also an attorney, are the principal owners of a law practice in Santa Ana. They have three children whom they hope will learn the value of public service and contributing to their community.

One thought on “Santa Ana Mayor Sarmiento has been elected to the O.C. Board of Supervisors”