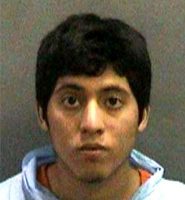 It looks like Judge M. Marc Kelly learned from his mistake back in 2015 when he took 15 years off of Rojano-Nieto’s mandatory minimum sentence.

You may recall that back in December of 2014, Rojano-Nieto was convicted of sodomizing his three-year-old sister. That crime should have resulted in a mandatory sentence in California of 25-years-to-life in prison. But Kelly decided that such a sentence would have been “cruel and unusual” so he reduced Rojano-Nieto’s sentence to only 10 years.

Kelly’s bad decision resulted in a recall effort against him. While that recall failed to garner enough signatures to make the ballot it clearly scared him.

Rojano-Nieto was 19 when he assaulted the unfortunate little girl after she walked into the Santa Ana garage where he was playing video games. The victim told her mother and then Rojano-Nieto confessed to police.

Rojano-Nierto’s defense lawyer was able to negotiate for more time to collect her client’s school records, and to have a psychologist meet with him. It is too late to do much about his pending sentence but the lawyer is likely trying to set up evidence to help her client when he eventually faces a parole board. Remember that Gov. Brown regularly pardons such criminals. Brown will be retired by the time Rojano-Nieto faces the parole board but by then some other liberal will probably be our Governor.

What Rojano-Nieto did is indefensible. He deserves the maximum sentence. And society deserves to be protected from him.