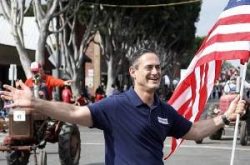 “A workplace must be a place of tolerance, respect, and equality. We honor these rights in the Orange County District Attorney’s Office. We evaluate employees only based on their performance on the job and not on their sexual orientation. The Supreme Court’s decision to protect employees from being discriminated against for being gay or transgender is a long overdue decision for equality, tolerance and respect.”

Here is a related press release from the Lawyers’ Committee for Civil Rights Under Law:

(WASHINGTON, D.C.) –The U.S. Supreme Court ruled in a landmark case today that Title VII’s protections from workplace discrimination “because of … sex” apply to LGBTQ employees. In a trio of cases challenging discriminatory actions of employers, the court ruled that Title VII of the Civil Rights Act of 1964 protects LGBTQ employees from being discriminated against on the basis of sexual orientation or gender identity. The following is a statement of Dariely Rodriguez, director of the Economic Justice Project at the Lawyers’ Committee for Civil Rights Under Law.

“This ruling is critical to maintaining vital protections for LGBTQ workers against workplace discrimination, wrongful termination and retaliation. Protections against discrimination are critically important now in the midst of massive unemployment rates resulting from a pandemic that has left many marginalized workers experiencing significant job insecurity. This decision ensures that some of our nation’s most vulnerable workers can rely on important civil rights protections in the workplace.”

“The LGBTQ community, particularly LGBTQ people of color, are often subjected to workplace discrimination and harassment, resulting in lower job security and economic stability. The Supreme Court reinforced that such discrimination has no place in our workplaces and in our society.

“Our country’s diversity is rapidly increasing, with more people including people of color identifying as LGBTQ. Despite LGBTQ people of color making significant contributions to our society, they suffer higher rates of job discrimination than their white counterparts. Title VII has made significant strides to make the workforce more diverse and inclusive, and its sweeping text is intended to ensure employees, regardless of their identity can meaningfully participate in our economy without fear of harassment or discrimination. The court’s ruling cements workplace protections under federal law for LGBTQ+ workers across America.”

In September of 2019, the Lawyers’ Committee, in conjunction with other civil rights organizations including The Leadership Conference on Civil and Human Rights filed an amicus brief before the Supreme Court urging the court to rule in favor of protecting rights for LGBTQ workers by upholding the plain language of Title VII and maintaining the spirit of the statute.

« COVID-19 update from Mayor Pulido on the use of face coverings
U.S. Supreme Court decision pauses the Trump crusade to deport the Dreamers »