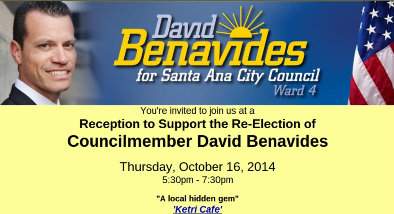 Santa Ana Councilman David Benavides is once again holding a fundraiser outside of his Ward, in Downtown Santa Ana, at Ketri Cafe, on Oct. 16, 2014, from 5:30 to 7:30 pm.

Benavides bills Ketri Cafe as “A Local Hidden Gem,” but I guess he hasn’t looked at their record of health violations.

They were inspected by the OC Health Care Agency on August 7, 2014, after a complaint, and the inspection resulted in a bevy of violations: END_OF_DOCUMENT_TOKEN_TO_BE_REPLACED