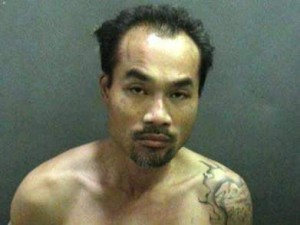 SANTA ANA – A third striker faces trial tomorrow for causing an explosion that started a fire inside his motel room. Thanh Van Quang, 39, Fountain Valley, is charged with one felony count each of arson of an inhabited property and possession of a flammable material with sentencing enhancements for arson with use of an accelerant, and four prior strike convictions from 1998 for voluntary manslaughter, assault with a firearm, and two felony counts of robbery. If convicted, Quang faces a maximum sentence of 31 years to life in state prison. Opening statements are expected to begin tomorrow, Thursday, Oct. 24, 2013, at 9:00 a.m. in Department C-28, Central Justice Center, Santa Ana.

At approximately 2:30 p.m. on Nov. 30, 2012, Quang is accused of starting an argument with the manager at Pueblo Motel in Santa Ana about Quang inviting guests into his own motel room. Approximately one hour after the argument, Quang is accused of walking to a nearby gas station, purchasing a gasoline canister, and filling it with one gallon of gasoline before returning to the motel.

At approximately 4:00 p.m., Quang is accused of causing an explosion in his motel room, which started a fire that damaged his room and neighboring rooms. Quang was captured on surveillance removing several items from his room prior to the explosion.