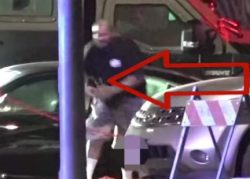 Santa Ana Mayor Vince Sarmiento’s sister, Vicky, and her husband, Dale Galipo, both attorneys, announced today that they are seeking $20 million in damages from the Anaheim Police Department for the killing of criminal Brandon Lopez.

The attorneys said they are still looking into the Santa Ana Police Department’s role in the shooting and standoff, according to the O.C. Register.

Unfortunately for the City of Santa Ana our own Mayor has spent weeks badmouthing the police for the killing of Lopez, who led the police on a dangerous high speed pursuit through several cities before the car he stole got stuck on the train tracks under construction in Santa Ana.

Lopez was seen on police videos smoking what looked like narcotics for four hours while the police begged him to leave the stolen vehicle. When he finally did get out he was carrying an object that looked like a gun and the police were left with no choice but to open fire.

Lopez’ cousin, Santa Ana City Councilman Johnathan Ryan Hernandez keeps insisting that Lopez was having a mental crisis that day but Lopez had a long history of criminal activities. And while he turned out not to be armed that was not the point. He was shot because of his actions, period.

If Mayor Sarmiento’s family ends up suing the City of Santa Ana as well he will be responsible for any money we end up losing due to his big mouth and defense of criminals.

We have to wonder if Mayor Sarmiento tipped his sister and brother-in-law about the Lopez case? WIll he get a commission if they win the lawsuit? Will he use that money to run for the O.C. Board of Supervisors?