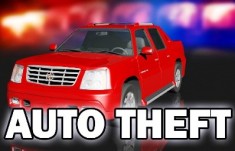 SANTA ANA, Calif. – A Los Angeles Police Department officer has been charged with three felonies and three misdemeanors for stealing a truck from a car dealership in Orange and then calling his own department’s Vehicle Warrant Unit to change the stolen truck’s status from stolen to recovered. He is also charged with repeatedly accessing a confidential law enforcement database to check on the vehicle’s status while driving the stolen vehicle for more than a year, including to work as a police officer.

He faces a maximum sentence of four years and four months in state prison if convicted on all counts.

Calleros was released on his own recognizance. He is scheduled to be back in court on April 15, 2021.

On October 25, 2019, Calleros is accused of going to B & J Car Company in Orange and driving off in a 2015 Chevrolet Silverado after he asked a car salesman to pull the CarFax on the vehicle.

Calleros is then accused of using another LAPD officer’s identification to call into the LAPD’s Vehicle Warrant Unit to report the stolen truck had been recovered.

Calleros is also accused of accessing the California Law Enforcement Telecommunications System (CLETS) to run multiple checks on the vehicle’s license plate number and different license plate number belonging to a 2014 model Chevy Silverado which he put on the stolen vehicle.

Following a nearly year-long investigation by the LAPD and the Orange Police Department, Calleros was arrested on November 9, 2020 at the LAPD’s Hollenbeck Division. The stolen truck was parked in the employee parking lot.